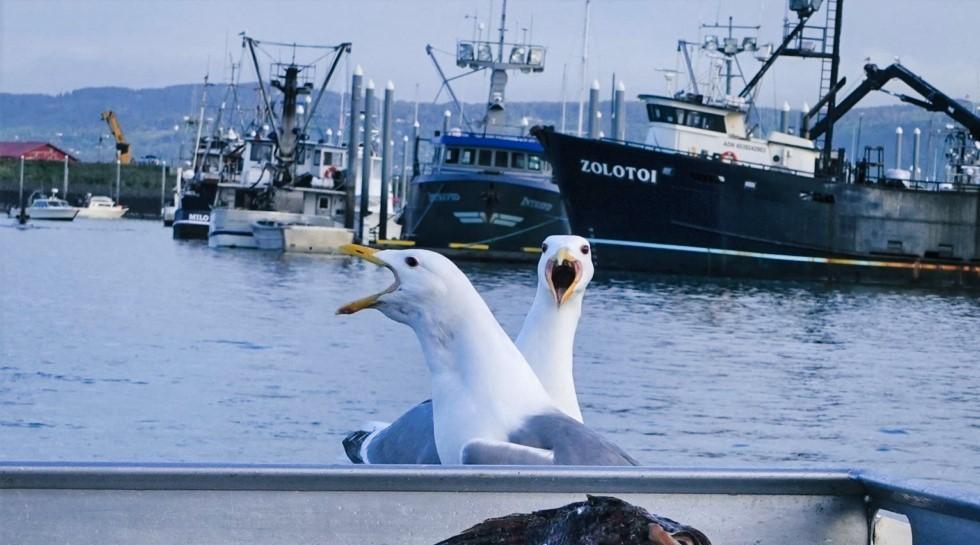 I have traveled throughout Alaska and have always loved it.  From RVing from Seward in the South to Denali, it was always filled with adventure and wonderment. When we first went to Alaska, there was 5 of us and we all did things that we always wanted.  Fishing for halibut and salmon.  Seeing bears in Denali.  And cooking along side the road off the beaten path.  Also, we have taken people and have enjoyed Polar Bears in the Arctic and visited the indigenous peoples in the Alaska north slope through www.XpeditionArctic.com .  All of these have left an indelible impression on our lives and our outlook on Travel.

When my son said that he wanted to go to Alaska fishing for a combined 28th birthday for himself and for Father’s Day for me, needless to say I was a bit worried.  We have traveled together before.  As a family. In a group.  But never alone together.  Will we even get along?  Can we spend 5 or 6 days alone with each other and what will we even talk about.

I have been proud of the man he has become and continues to try to be.  He has come along way and I thought we should do it.  A “man’s trip” to the last frontier.  And I wanted the fish.  So, I booked the trip in March and we went at the beginning of June.

We had a smooth flight and landed in Anchorage about an hour earlier than scheduled.  Though it was a 6-hour flight from Chicago, no food was served.  We did have a cracker.  So, we were hungry and tired as it would be about 1AM on the east coast. After a quick snack we were ready to go.

We went to pick up the car I was glad we booked it so long ago.  Rental cars are at a premium now, with some going well over $300 per day and becoming more and more unavailable.

The person behind the Avis counter told me that my car would not be ready for an hour (it was 9pm already) and that I could upgrade to get a car immediately.  Since the upgrade was only another $60, I decided to do that, but felt it was just another way for Avis to get money out of clients.

Anyways, we took off and stayed at an Airbnb in Anchorage about 5 minutes away from the airport and another couple of minutes to the highway.  It was a nice house but we did have difficulty with it being light out 24 hours a day and never getting dark. The blinds did not close all the way, so the light was constantly getting in, but Anchorage has always been a place to fly into and out of and not much more for me.  We looked forward to leaving the city and getting out into the wilderness, the wildlife and the scenery.

The next day we would be heading to Homer and trapped together in our vehicle for about 6 hours.  That is the real test.  The real journey begins.  Am I ready for it I wondered?  As I found out later, he was wondering the same thing.

A Moose along the way to Homer.

Our way from Anchorage to Homer

What started out with some trepidation on both of our parts, the 6-hour trip was filled with laughter, watching out for moose and generally a great time.  I learned so much about my son.  Even though he lives about 3 miles from us, and we see him often, there were aspects of him that I was unaware.  For example, he has kept a journal of his past trips.  He has gone to Alaska, France and Italy. And he brought that journal with him so he can update it.  Kati and I have journals from all of our trips and it is really special to look through them and remember what we did and things we encountered.

We both loved looking for moose and bears. I as the driver and he as the navigator and main look-out. Though we did not see any bears on the way down or back, we did see 10 moose including 4 small ones.  It was really special and we had a great time exploring the smaller towns from Anchorage to Homer.

For anyone heading to Homer, though your GPS says 4 hours, it will take closer to 5 or 5 ½.  There is only one road and you will want to stop quite often.  Also, with some construction on the way, leave yourself some extra time.  It is about 100 miles longer than driving to Seward, but the trip is well worth it.

There were many small towns with Russian influence.  We stopped to check those out along with beaches and of course to see moose.  The trip took us about 6 hours, but it went by quickly.  We talked, shared and solved almost all the world’s problems and we enjoyed being together. All of our trepidation was lost. 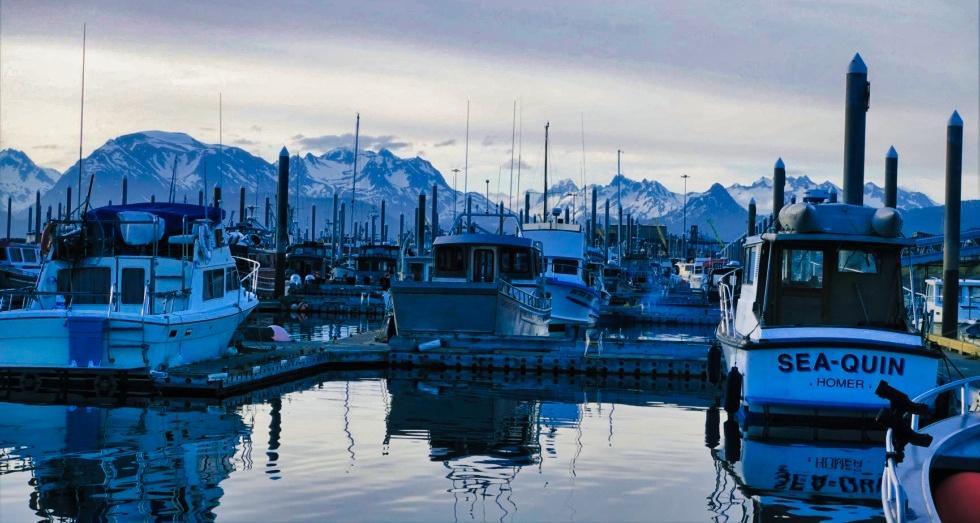 Morning at the docks in Homer Alaska

Homer is a fantastic city.  Centered around the fishing industry, the main area is the Homer Spit.  A narrow piece of land that juts into Kachemak Bay.  With restaurants, coffee shops, tourist shops, camping and the docks to catch your fishing trip, the Homer Spit is a wonderful place to explore.  Once my son and I checked into our hotel in Homer, we headed to the Homer Spit to see where we would catch our boat for the next two days of fishing.  We were a bit surprised about the people tent camping on the spit, as it was about 40 degrees at night with a high of 55 and windy.  But if you are prepared, it is an inexpensive way to enjoy Alaska and save some money. Alaska can be expensive.

The first day, we had planned to go trophy fishing for Halibut but the weather did not cooperate.  We still went fishing but with gale force winds we were only able to go out about 10 to 15 miles.  It was a fishing trip that we would never forget.  The entire way was 6-to-8-foot waves and the boat would constantly crash down upon the water.  With it being so windy and rough, we had to stay in the small cabin.  The entire day fishing, the boat was rocking back and forth and side to side.  We did pull in some big ones with one person on our boat snagged a 130 lb halibut and our largest was 65 lbs.  I did not get that one, my son did which made it even more exciting.  To see him real in a large fish that was about 50 inches in length was just as exciting for me as it was for him.

We both caught our limit and we headed back to land.  But before we went back, my son had to prove his manliness.  There is a tradition in Alaska, when you catch your first halibut, you eat the fish eye.  Though not many people actually do this, my son decided to give it a try.  Armed with some Jack Daniels whisky to wash it down, he ate the eye, and became a legend on the boat.  It was a strange, gross, wonderful moment and then we headed back.

The trip back was not much better, but the captain did a great job.  My spine and back did feel it though and I was dizzy when I finally stood up to exit the boat.  Hopefully the next day would be better.

The second day it was better.  And we caught some great fish.  Salmon, halibut, cod, rockfish and flounder were all brought in.  In total we were able to send back 110 lbs of fish back to Florida and we had a great time together. It was difficult, as the day before we fished quite a bit in shallow water, we were now fishing in 220 feet of water with a 4 lb weight at the end of our line.  Just reeling it in took some effort and though the captain and his mate were great, they offered no help. After all, this was a trip for experienced fishermen.  We must do this all the time.  Though that was not true in regard to us, we did it and felt a sense of accomplishment when snagging a large fish.

We loved being together.  Laughed and joked around and got to really know each other.  In the end, though I did not think so before we left, my son and I have more in common than I ever thought.  He has grown up and not the same as when he was 19 or 20 years old.  He has goals.  He wants to do so much and has already.  The world to him is a small place and I think he will enjoy traveling and exploring all of his life. 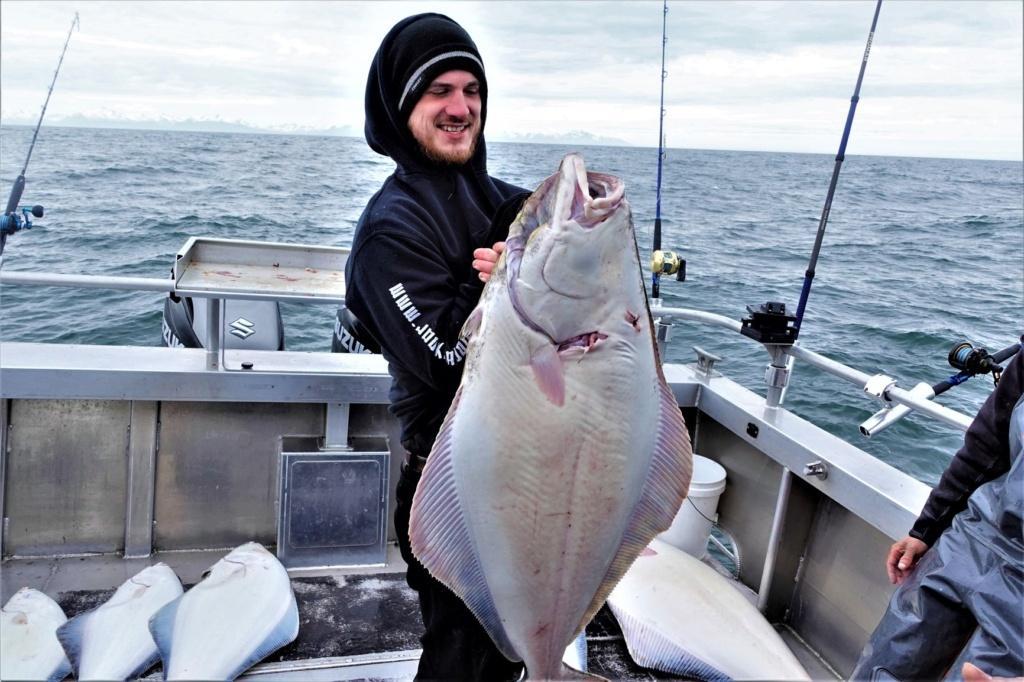 We had an 8pm flight leaving Anchorage the next day.  So, we awoke in the morning, had our coffee and were on our way.  We took it slowly as we traveled north on the same road that we came south.  There is only 1 road so you really can’t get lost.  Again, we enjoyed each other’s company and laughed, joked and looked out for moose the entire way.  We reminisced about the last time we were in Alaska together, talked about the crew and other passengers on our two fishing trips, stopped and shopped some and had a great time together.  We made our flights and arrived home safely.

Catching a ride on our boat.

Some things to know when traveling to Alaska

The final word from my trip with my son:  I am so glad I made it.  I was so happy to be with him and we really had a great time   We are already talking about what to do and where to go for his 30th birthday.  I can’t wait.

And to all the fathers, go somewhere with your son or sons and have some time alone.  Get to really know each other.  And to the mothers, do the same with your daughters.  It really was one of the best experiences of my life.